Insper Institute of Education and Research and Federal University of Sao Paulo, Brazil

From 2001 to 2015, Brazil experienced a profound reduction in income inequality. The commodities boom and some institutional changes in the early 2000s kick-started the Brazilian labor market, increasing the quantity of formal jobs and earnings, especially for the poorest workers. Significant increases in average schooling and the real minimum wage helped reduce ethnic, gender, and regional earnings gaps, though all remain rather high. However, since 2014 a major fiscal crisis has negatively affected GDP and the labor market, seriously threatening these achievements.

Unemployment fell and more formal jobs were created, even with a 92% increase in the real minimum wage.

Employment protected by formal contracts increased both in quantity and in share of total employment.

While real increases in the minimum wage helped reduce inequality during the boom period of the 2000s, since the start of the crisis period in 2014, they have contributed to increasing inequality.

Gender and ethnic earnings gaps remain high, at 41% and 15%, respectively.

In 2015, only 46% of employees in the private sector were protected by formal contracts.

The Brazilian labor market experienced a host of positive developments between 2001 and 2015. Inequality fell, as average schooling levels, labor earnings, and formal contract hiring substantially increased. Despite this period of progress, which is now threatened by an ongoing fiscal crisis, the Brazilian labor market has much to improve upon, particularly with respect to informality and the gender and ethnic earnings gaps. Key policy initiatives for the future should include improving the quality of education, reducing the administrative burden of hiring formal workers, and further opening the country to international trade.

Many countries are currently facing the challenge of improving labor productivity and reducing income inequality. Studying how different labor markets evolve provides insight for public policy and economic science. This article summarizes these issues for Brazil. The Brazilian economy presents a valuable case study, since it has experienced major structural changes in its labor market over the last 60 years, including a recent drop in labor market inequality.

Between 1950 and 2005, the Brazilian labor market underwent a significant process of structural change, with the largest share of employment moving from agriculture to the manufacturing and service sectors. Figure 1 provides evidence of how productivity growth is associated with a massive transition of workers from less productive sectors (such as agriculture) to more productive sectors (such as financial and personal services) [1]. 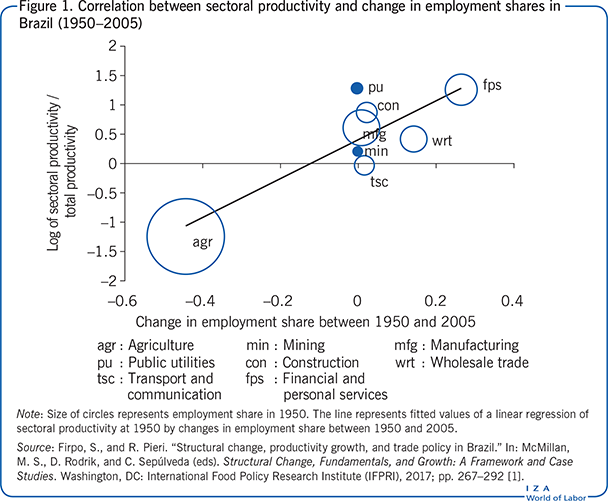 Figure 1 shows that in 1950 the agricultural sector had the highest employment share. However, it also had the lowest productivity of all sectors, and lost a greater employment share than other sectors between 1950 and 2005. This structural change brought about substantial increases in labor productivity due to sectoral shifts in labor force composition, but unfortunately came at the expense of a large increase in wage inequality. This increasing trend in inequality was only interrupted in the mid-1990s as a result of monetary stabilization and a rapid increase in schooling among the labor force. Figure 2 shows the long-term trend in inequality [2]. 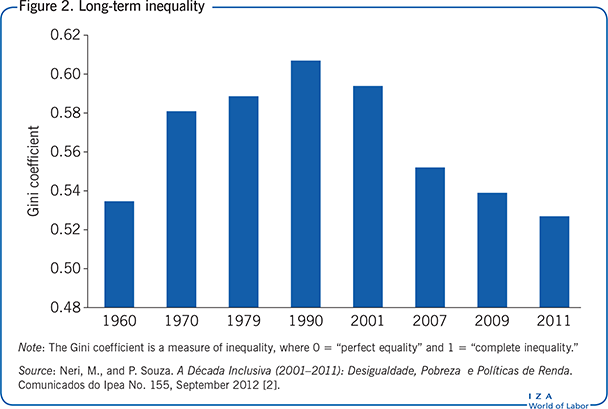 At the turn of the century, Brazil universalized access to basic education. This caused the average schooling of the labor force to jump from six to almost nine years in the decade and a half since the reforms were passed. Accordingly, Figure 3 shows that the proportion of private sector workers with at least a high school education has substantially increased. 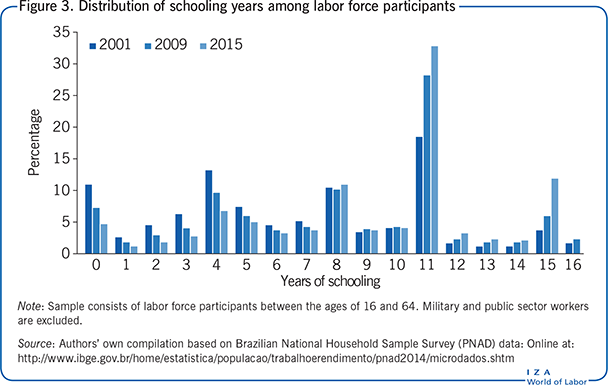 Despite the fact that school quality is still a troubling problem and that a large share of students do not have access to higher education, advances in the average amount of schooling contributed to a fall in the returns to education over the same period [3]. Among workers with the same set of observable characteristics in 2001, one additional year of schooling raised earnings by 10.9%; by 2015, this had dropped to 8.3% (as shown in Figure 4). The reduction in the returns to schooling contributed to a drop in wage inequality because the difference in labor earnings between more- and less-educated individuals fell. 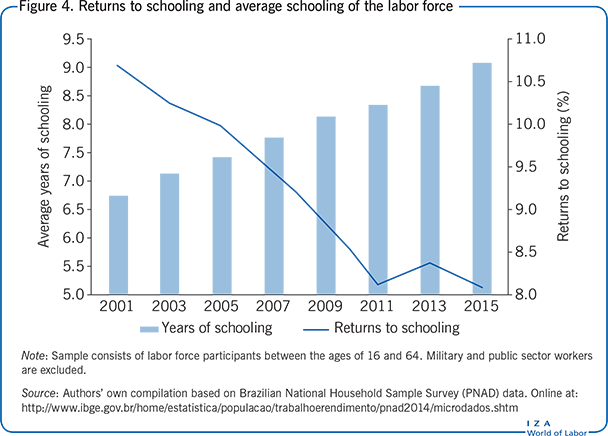 Perhaps the most important policy affecting labor income in Brazil has been the continuous elevation of the minimum wage over the last 20 years. From 2001 to 2015, the minimum wage had real gains of 91%. As seen in the illustration on page 1, the rise in the minimum wage coincides with increases in real earnings. This is explained by the fact that the minimum wage works as a reference for companies to price labor.

A potential side effect of these real increases in the minimum wage is the incentivizing of firms to hire workers without a formal labor contract, thus making the minimum wage non-binding and increasing informality. Nevertheless, informality decreased from 2001 to 2015, due especially to the prolonged economic boom throughout this period. However, informality remains high in an international context; as shown in Figure 5, despite increasing significantly since 2000, less than half of Brazil’s workers held formal contract jobs in 2015. Of course, other reasons, like the existence of high labor taxes, also help to explain this. 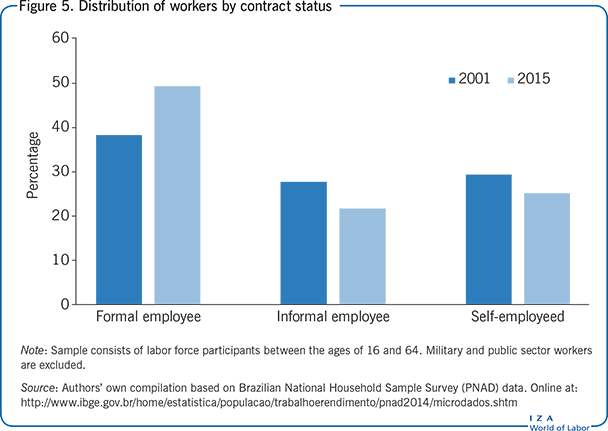 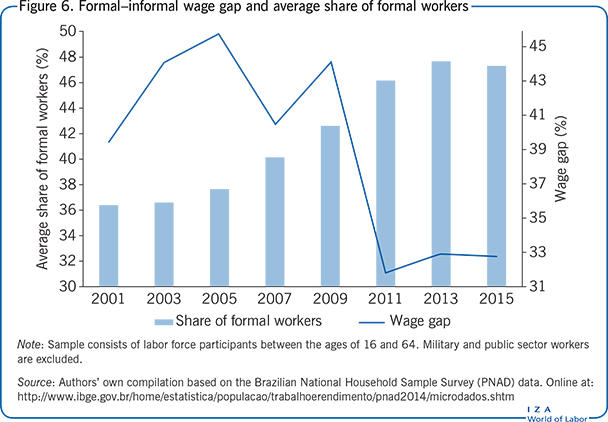 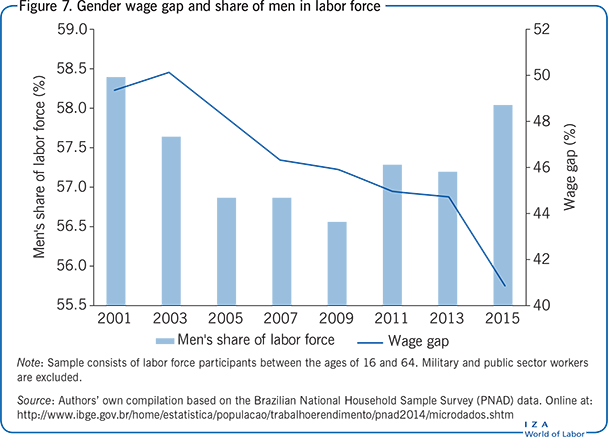 The ethnic earnings gap is analyzed by comparing the groups formed by white workers (taken here to include those of Asian descent) and non-white workers. In Brazil, non-white people represent 55% of the adult population, and by 2015 represented the largest share of the labor force (55.5%). On average, they study an average of 1.7 years less than the white population. Ethnic gaps in labor income dropped from approximately 17.5% in 2001 to 15.5% in 2015, as shown in Figure 8. 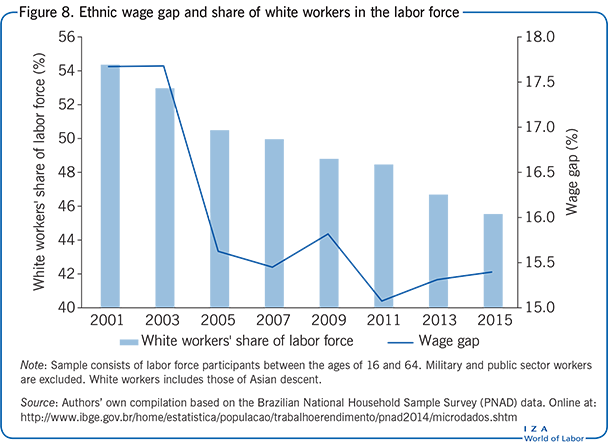 Unlike the fairly consistent declines in the gender and ethnic earnings gaps, the regional earnings gap has evolved erratically during this period. This gap is significant, as different regions in Brazil have very different labor market situations. In 2015, the regional earnings gap remained high, at 31%. Brazil’s South-Center region (in which the major cities of Sao Paulo and Rio de Janeiro can be found) holds the majority of the country’s jobs and population (around 69% of the labor force and 64% of population in 2015) (Figure 9). 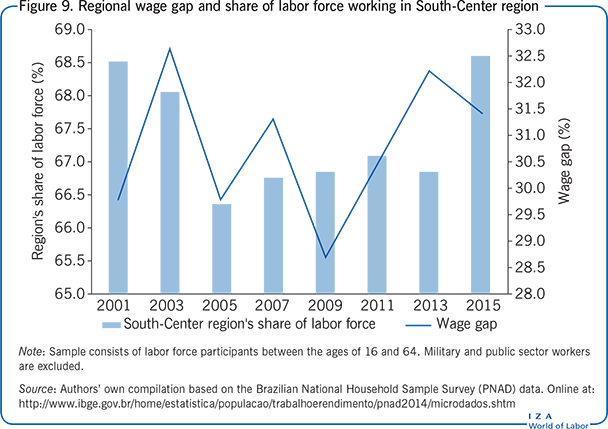 Economic growth throughout the 2000s was accompanied by low unemployment rates. However, starting in 2015, Brazil has experienced its worst economic crisis in over a quarter of a century as a result of fiscal and political issues. Figure 10 shows that 2015 represented a turning point in the labor market. In the two years since, real monthly wages have fallen and unemployment has almost doubled. Nevertheless, the minimum wage kept increasing in real terms. Given the large fraction of workers that are not covered by labor contracts, the recent rises in the minimum wage may have contributed to an increase in income inequality, both by displacing workers from formal jobs and from employment overall. As more data become available, future studies should investigate the causal link between real minimum wage increases and inequality. 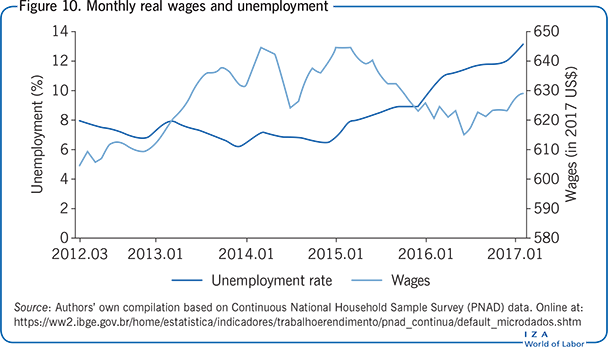 A key limitation involves a 2016 methodological change to the main data source used in this analysis, the Brazilian National Household Sample Survey (PNAD). From 2012 to 2015, the Brazilian Census Bureau (IBGE) managed two different population surveys: PNAD and Continuous PNAD. After 2015, only Continuous PNAD was kept. The databases differ on periodicity and coverage, meaning that, due to this change, it is not possible to compare data from the earlier part of the 21st century to today’s data. It should also be noted that the data used in this article exclude public sector workers and the military. Those groups represent around 7% of Brazilian workers and do not respond in the same way to market shocks. PNAD data have been used to analyze recent changes in earnings distribution by, for example, [3], [4], [5].

Yet another issue is that the reduction observed in the return to schooling is probably not due exclusively to the increase in the supply of skilled workers; it may also be derived from changes to school quality. However, a lack of necessary data prevents an investigation into the relationship between school quality and labor market outcomes. Access to the relevant data would allow for a better understanding of the interplay between changes in wage inequality and the returns to schooling in Brazil.

The data presented here suggest some policies that could improve labor earnings and allow Brazil to continue reducing inequality among its labor force. It is clear that increases in the minimum wage played an important role in anchoring average wages since the remuneration for many jobs is based on multiples of the applicable minimum wage. However, minimum wage policy can also displace workers and increase informality when the economy is not performing well. Policies that reduce the administrative costs of hiring a formal worker would improve labor earnings.

The analysis further shows that the increase in earnings was correlated with a massive increase in years of schooling. Hence, policies that incentivize students to finish high school or to enter into higher education could promote a more equal income distribution. Moreover, it appears that school quality rose in importance as the returns to education fell from 2001 to 2015. More-educated workers need to be transformed into more-productive workers, which may require policies to improve the quality of education and training.

Other macroeconomic policies would also be relevant for Brazil’s labor market. While undergoing substantial structural change throughout the second half of the 20th century, Brazil closed its doors to the world market. Even after a process of trade liberalization occurred in the 1990s, there remains considerable room to increase international trade flows. As such, a further reduction of trade barriers could improve the productivity of Brazilian workers.

The authors thank two anonymous referees and the IZA World of Labor editors for many helpful suggestions on earlier drafts.