Persistent unemployment after recessions and the policies required to bring it down are the subject of an ongoing debate. One view suggests there are fundamental changes in the labor market that imply a long-term higher rate of unemployment, requiring the implementation of structural policy reforms. The alternative view is that the slow recovery of the economy is due to cyclic reasons coming from lack of demand which prevents unemployment from falling quickly. Knowing whether higher unemployment is caused by structural change in the labor market or whether the problem is cyclic determines how effective policy can be in addressing the problem.

Most of the large increase in unemployment during the 2007−2009 recession appears to be cyclic, not structural.

Demographic groups experiencing greater unemployment during a recession are those employed in highly cyclical industries.

Evidence suggests mean wages decline during a recession indicating lower labor demand rather than a structural shift in labor supply.

Vacancy rates are high relative to unemployment rates during the recovery from a recession.

Labor mobility is lower during recessions.

The ratio of long-term unemployed to the total number of unemployed rose dramatically in the 2007−2009 recession.

It is difficult to determine whether a recession is cyclic or structural while it is underway, but there are indicators that make this possible.

The optimal macro policy response to a negative shock is quite different depending on whether unemployment is structural or cyclic. Monetary policy is an inappropriate tool for addressing structural problems, but may be relevant for cyclical unemployment. The high unemployment during the 2007−2009 recession in the US is primarily cyclic. This does not imply that monetary policy will be effective; only that it is not ruled out as a possible tool.

When a recession hits an economy, policymakers want to take actions. Designing the optimal response to a negative shock requires a deep understanding of the mechanisms through which the economy and, in particular, its labor market operates. The speed with which the economy recovers depends on the recession’s severity, the way it is managed, and the design of labor market institutions. During most recessions, especially the most severe ones, there is a debate about the extent to which there are fundamental changes in the labor market that imply a long-term higher rate of unemployment than the one prevailing in the past. The alternative view is that a slow recovery of the economy is cyclic, coming from lack of demand, which prevents unemployment from falling to the pre-recession level.

The aim of this paper is to help policymakers to decide whether unemployment during an economic downturn is a cyclic phenomenon by using a set of indicators. The analysis presents empirical findings considering the US experience during and after the 2007−2009 recession as a case study. The paper also highlights limitations and gaps in the literature, and concludes with a brief summary and a discussion for the role of policy.

Prolonged periods of high unemployment rates may suggest that a structural change has occurred, causing a higher natural rate of unemployment.

Existing literature focuses on a number of structural factors that can explain the increase in the unemployment rate. These include:

Changes in the unemployment rate come about because of compositional shifts in the economy, which might be labeled structural, and changes in the group specific unemployment rates, which might be labeled cyclical [1]. Compositional changes refer to changes in the weight of different groups in the economy. For example, in a number of countries, manufacturing has declined as a share of the labor force (for example, the US), the proportion of females has risen, while the labor force has aged and become better educated. In addition, some of these changes might have a cyclical component. For example, the relative share of construction might be lower during downturns, affecting low-skilled men disproportionately more than women or high-skilled workers.

These findings suggest that no significant structural shift occurred during the 2007−2009 recession and that, for the most part, it appears to resemble earlier recessions [1].

A mismatch occurs when the vacancies available in an industry, occupation, or location do not match the skills of the available workers. Most of the logic behind structural impediments in the labor market relates to mismatch. When there is mismatch, a change in the skill composition of the workforce (or skill requirements of the jobs available) is required to reduce unemployment. For example, there may be many unemployed construction workers but few vacancies in construction while there are few unemployed health care workers but many vacancies in health care. Mismatch problems are not easily remedied by central banks, as they cannot bring about fundamental changes in the skill and/or industrial structure [1]. 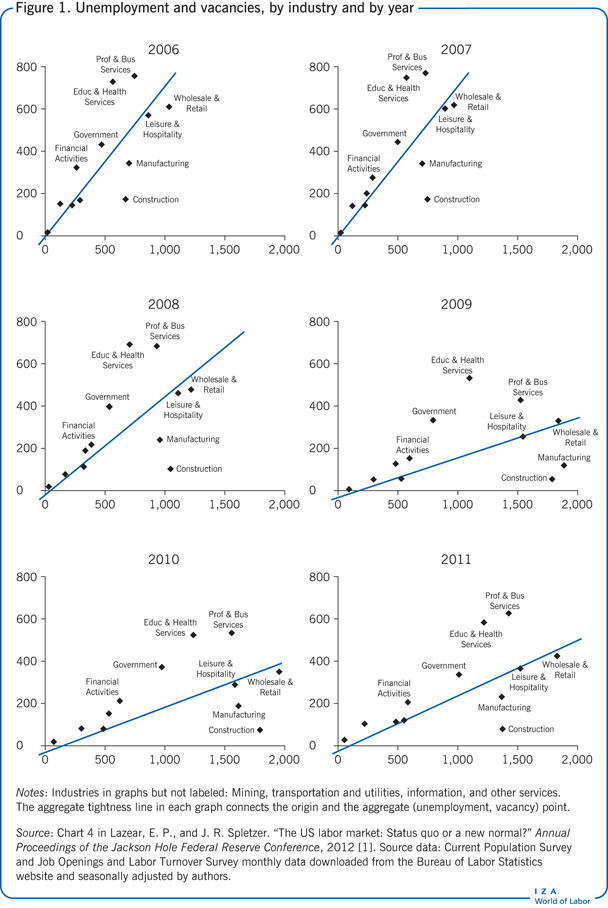 Reduced matching efficiency may also result from mismatch between the geographic location of available workers and jobs. Geographic mismatch may be particularly relevant to the 2007−2009 recession because unemployed workers whose home values drop below the amounts they owe on their mortgages may face a “housing lock,” which leads to lower labor mobility. Evidence for the US suggests no increase in geographic mismatch during the 2007−2009 recession [2], [3]. In addition, findings using mobility data are not consistent with the view of reduced match efficiency because of the “housing lock.” Although geographic mobility declined during the recession for both owners and renters, the fall was primarily among renters, not owners [1].

During the 2007−2009 recession the average level of unemployment increased not because of mismatch, but because all industries and occupations had more unemployed and fewer vacancies. The conclusion is that changes in mismatch are cyclical, rather than structural. The change over time does not seem to reflect any permanent shift in the labor market that happened in an abrupt manner, nor does the industrial mismatch analysis suggest the shifts will persist [1].

Changes in the price of non-work might be another potential structural cause of higher unemployment rates in all industries. Expansions in safety net programs during recessions, such as the availability of extended unemployment insurance benefits, even if desirable, reduce the value of work relative to leisure. As a consequence, most of the decline in work hours during the 2007−2009 recession has been suggested to be a result of government-induced distortions that reduced the value of work [4]. More generous benefits received during unemployment increase the implicit tax on work, which is defined as the extra taxes paid and subsidies forgone as the result of working. But other empirical evidence suggests that such a supply shift cannot account for the bulk of higher unemployment rates [5], [6]. The impact of extended insurance benefits on the unemployment rate was found to be about 0.8 of a percentage point in one study, while another finds that it was only 0.3 of a percentage point, with more than half of this due to increased labor force participation among those who would in any case not be employed [5], [6]. Other estimates range from 0.7 of a percentage point to a maximum of 1.7 percentage points. Additionally, there is no sign of mean wages being bid up when examined in terms of education, age, geography, or industry [7]. Instead, wages have fallen rather than risen, which suggests that there is not a decline in labor supply.

It is difficult to believe that a reduced incentive to work does not result in some increased unemployment. The issue of how large this factor is in explaining the high and prolonged unemployment of the 2007−2009 recession and slow recovery remains uncertain.

The existing evidence is scarce.

Shifts in the Beveridge curve

Shifts in the Beveridge curve (that relate vacancy rates to unemployment rates at a point in time) may be a sign of structural changes, such as increased mismatch or supply shifts in the economy. An examination of the Beveridge curve for the US suggests the possibility of structural change, because vacancy rates are high relative to unemployment rates during the recovery from the 2007−2009 recession (see Figure 2). The pattern is equally consistent with the counter-clockwise dynamics observed during recessions and recoveries. The intuition behind the dynamics is that the posting of vacancies increases before actual hiring occurs. Thus, there is a short-term increase in vacancies before unemployment declines. Extended unemployment insurance benefits may contribute, as the unemployed delay their return to work [1]. 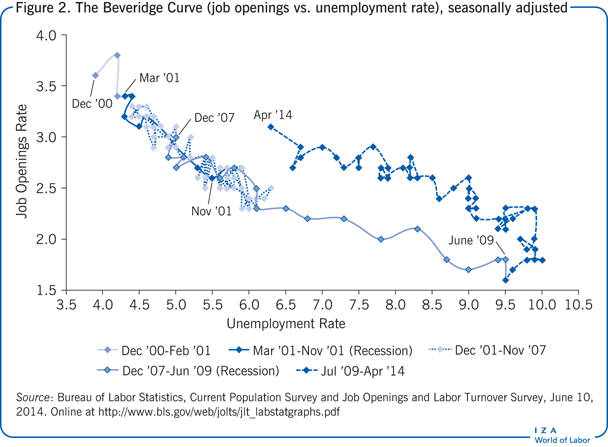 Existing evidence from the US shows that, historically, during recessions the actual unemployment rate is higher than that which would have been implied by the long-term Beveridge curve by as much as 4 percentage points, which disappear as the economy recovers [5]. The introduction of structural reforms in the UK and Germany is suggested to have increased the flexibility of the labor market [8].

One limitation of this analysis is the difficulty of determining whether a recession is cyclic or structural while it is underway. This may lead to an underestimation of the potential increase in structural unemployment. Furthermore, empirical findings available to date consider predominately the US experience during and after the 2007–2009 recession. Hence, this is a case study only and evidence for other countries is still scarce.

The design of policy responses to high unemployment rates during a recession should be based on the evaluation of indicators such as the composition of the unemployed, the degree of mismatch in the labor market, and whether there are any supply shifts. The evidence from the US experience of a persistently high unemployment rate during the 2007−2009 recession points to primarily cyclic factors driven by problems in the general macroeconomic environment and not in the labor market. Therefore, the standard cyclic remedies, to the extent that they are effective, were appropriate.