High-potential female-led ventures can contribute greatly to individual welfare and to regional/national economic development, while also serving as role models for potential entrepreneurs.

Factors that foster high-potential female entrepreneurship include qualities of the individual and of the institutional environment.

Factors interact to form a national entrepreneurship ecosystem with a unique set of strengths and weaknesses, and a country’s ranking changes based on ongoing developments.

A national index is not a perfect substitute for fully understanding each country’s context, and it does not account for potentially vast regional differences within countries.

There are many additional factors that should be considered but for which there are no consistent data.

There are major data gaps for individual countries, particularly in Africa.

High-potential female entrepreneurs advance their personal economic welfare, but they also drive local and national economic development, and often make substantial contributions to the social fabric. Moreover, high-potential female entrepreneurs often serve as role models for other women and create entirely new industries. Policymakers are interested in stimulating high-potential entrepreneurial efforts by women in their home communities, but to do so they need to understand the factors that foster such activities better and to measure and benchmark these efforts across countries.

Female entrepreneurial activity is an important phenomenon around the globe

One-third of the world’s entrepreneurs are women, although participation rates vary substantially. For example, male and female entrepreneurial activity is at near parity in Africa, but there is a vast gender gap in the Middle East and Asia [2]. Most female entrepreneurs have lower levels of initial financial capital than do men, and that capital is more likely to come from informal sources such as their own savings, or loans and gifts from family and friends, as opposed to bank, business angel, and venture capital financing. Moreover, women tend to be less concerned with expanding their firms and are over-represented in service industries [3]. Although female entrepreneurship is linked to economic growth [4], there are many different types of female entrepreneurial activity. This paper is concerned with high-potential female entrepreneurship—business ventures by women that have the potential to be high-growth, export-oriented, and innovative and that have the strongest prospects of contributing to economic growth and development.

Several examples of high-potential female entrepreneurs can give an idea of the range of these activities. Victoria Wills of the UK started NuBeginnings, a weight-loss bootcamp with physical locations in the UK and France, and more than 30 full- and part-time employees. Anne Wojcicki is the co-founder and chief executive officer of 23andme, a personal genomics and human genome research company that has received more than $270 million in venture capital financing. Weili Dai is the co-founder and president of Marvell Technology Group, one of the world’s top semiconductor firms, which is publicly traded and employs more than 7,000 people. Sarah Blakely invested her life savings of $5,000 to start Spanx, a woman’s undergarment company that has $250 million in annual revenues with 20% net profit margins. And Amanda Elam co-founded Galaxy Diagnostics, a company that developed an innovative test for Bartonella disease and that has more than 700 customers in ten countries. All five of these women’s businesses are fast-growing and adding value to their local and national ecosystems, as well as directly to their customers.

There is growing awareness among both entrepreneurs and policymakers that many of the support mechanisms for entrepreneurship, including high-potential ventures, are not gender-blind [6], [7], [8], [9], [10]. Supporting female entrepreneurs requires attention to specific factors that are important to the development of women’s enterprises. Research in this area generally describes three main components: the entrepreneurial environment, ecosystem, and aspirations.

With respect to the entrepreneurial environment, there is substantial evidence of a positive association between the share of the population that perceives that entrepreneurial opportunities exist and the rate of company start-ups [11]. Women who believe that they possess the skills needed to start a business are more likely to start one [2], [11]. However, women perceive opportunities differently than men do, and they perceive their risk environment differently than men do too [3]. Fear of failure is a major obstacle to women starting a business [2], [3], [14]. Female entrepreneurs tend to be more highly educated than their male counterparts [2], [3]. Furthermore, women who start new ventures are more likely to possess strong networks to other entrepreneurs [11] and to potential financiers [2], [3]. Also associated with higher rates of female start-up activity are positive perceptions about female leaders and the presence of a wide array of sociocultural supports, such as access to childcare [7], [9].

Research on general entrepreneurial ecosystems suggests that higher-quality businesses results when entrepreneurs are motivated by opportunity rather than necessity [11]. Countries that restrict freedom for women have lower female labor market participation, including lower rates of female entrepreneurship [6], [7], [9]. Entrepreneurs who start high-growth businesses tend to be highly educated, while support and training for these founders of small businesses can strengthen skill development [12]. Innovation is usually associated with entrepreneurs’ active management of resources, including technology [12]. Entrepreneurial activity is stimulated by the presence of technology sectors and entrepreneurial role models [11]. A final consideration for ecosystems is that new business entry is thwarted by a high degree of monopolization of markets [13].

The third factor that is important to the development of women’s enterprises is entrepreneurial aspirations, which refers to current and future evaluations of growth and technology. New ventures frequently employ product innovations, and spillovers of technology knowledge can enable entrepreneurship [11]. There is also a link between the systematic development and use of new technology and overall entrepreneurial activity [11]. International ventures are more likely to grow than domestic ventures—and are more likely to grow faster [12]. A final consideration is the importance of access to first-tier and third-tier financing.

Comparative data are now publicly available that make it possible to examine conditions for female entrepreneurship across countries systematically. These cross-country data can be used to identify best practices for government programs designed to support high-potential entrepreneurs [10]. 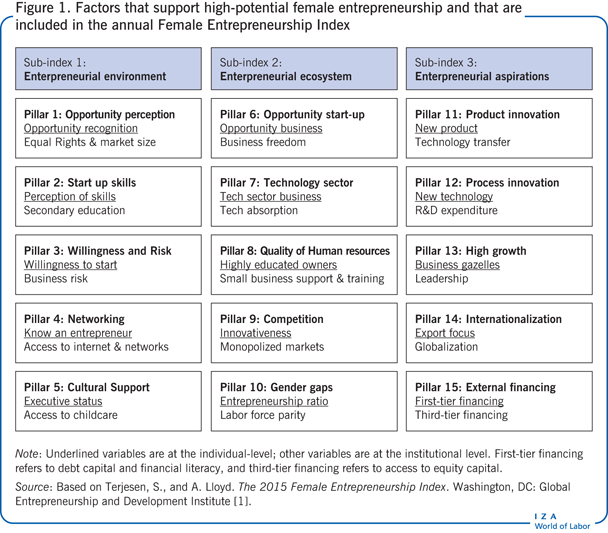 Sub-indices and pillars of the Female Entrepreneurship Index

In calculating the FEI, poor performance on some pillars cannot be obscured by better performance on others because a penalty is assessed for bottlenecks. Thus, good performance in one category is not allowed to substitute for poor performance in another, and the greater the imbalances in scores across pillars, the greater the penalties assessed. After the scores for all pillars are normalized, a country’s pillars are penalized by an amount proportional to the deficit relative to the other pillars of each country’s weakest performing pillar.

Each country has a unique set of strengths and weaknesses, and the rankings change based on continuing improvements. In 2015, the top ten countries offering the most attractive environments for high-potential female entrepreneurs were, in order, the US, Australia, the UK, Denmark, the Netherlands, France, Iceland, Sweden, Finland, and Norway.

Although there is a growing awareness among policymakers of the factors that support high-potential female entrepreneurship in many countries, nearly two-thirds of countries score less than 50 out of 100 in offering these conditions.

The Female Entrepreneurship Index for the US, Sweden, and India

To illustrate the power of the FEI, Figure 2 shows data for the US, Sweden, and India. The height of each bar captures the extent of the presence of each pillar, from shortest (lowest) to tallest (highest). Highest scores are shown in blue, and lowest scores are shown in black. The figure shows that country policy efforts to create more high-potential female entrepreneurs should be directed toward their lowest-rated pillars. 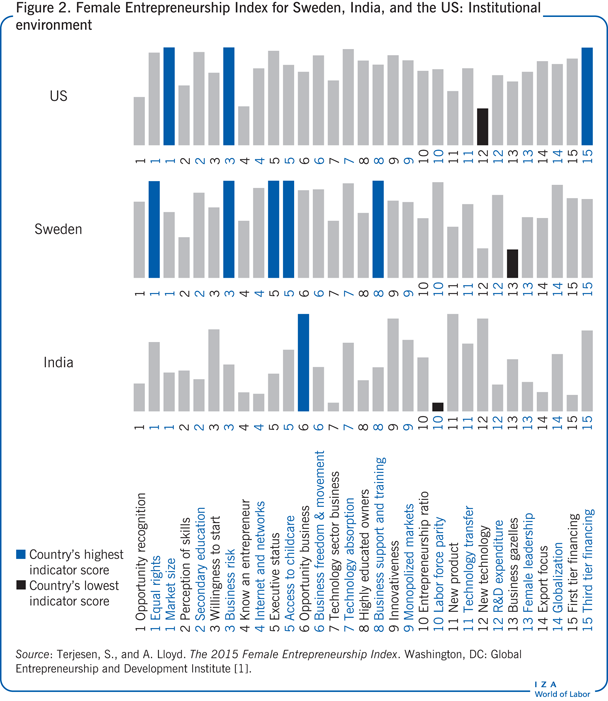 The US ranks at the top in having a supportive institutional environment for high-potential female entrepreneurship. The blue bars indicate that the US has a world-leading environment in market size (1), business risk (3), and third-tier financing (15). By contrast, the black bar for new technology (12) is the country’s lowest scoring pillar. That is, the use of new technology (five years old or younger) lags behind other indicators in the US, implying that policy efforts should focus on improving this bottleneck factor by creating better conduits between new technologies and high-potential women entrepreneurs. Furthermore, as indicated by the small gray bar for knowing an entrepreneur (4), the US has a low percentage of the adult female population who report that they are personally acquainted with an entrepreneur. This variable is important because individuals who know entrepreneurs are far more likely to start a business.

India’s environment is quite different from that of the US and Sweden. It has a blue bar for world-leading opportunity-based business (6) and fairly tall gray bars indicating solid performance on innovativeness (9), new products (11), and new technologies (12). India’s lowest-scoring pillar (black bar) is for labor force parity (10), indicating that considerable work needs to be done to help women become equal participants in the labor market.

To estimate the effects of occupational crowding, sector divisions are standardized across countries using gender-disaggregated data. A ratio between 4:6 and 6:4 is considered balanced, and only sectors that employ at least 1% of the total labor force are included. Figure 3 depicts occupational crowding by country. As shown, the countries with the most balanced distribution across sectors are the UK, Sweden, Brazil, France, and the US. 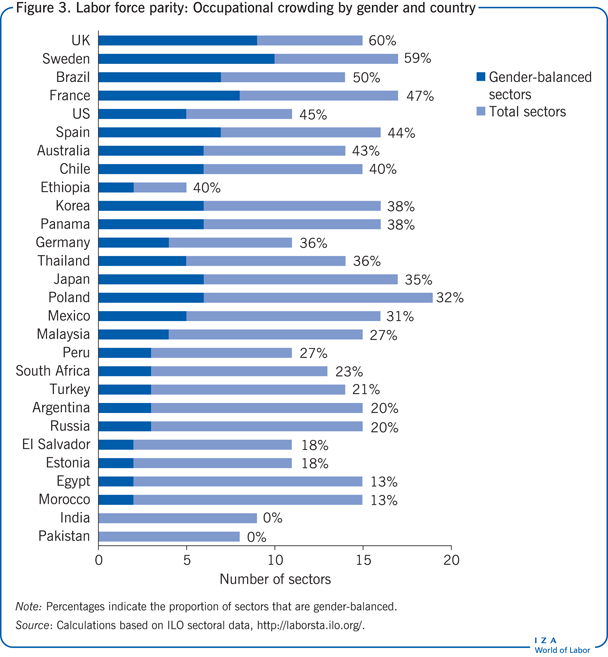 Policy and research on women’s entrepreneurship is constantly evolving, and thus an index is only a snapshot of the current situation, which can change with the adoption of new policies and altered circumstances. Researchers still need to develop a deeper command of each country’s context, to grasp the reality of the situation on the ground and to understand how an individual’s ability to seize opportunities to start a high-growth firm may depend on the relative strengths of some factors. Some individual and institutional variables (pillars) may be more important in certain countries than in others, even after applying the penalty for bottlenecks. Thus, an index is not a perfect substitute for a full understanding of each country’s context.

In addition, there may be other factors, not included in the FEI, that affect the conditions for high-potential female entrepreneurship. However, the consistent data across countries needed to analyze such additional factors are lacking. One example is the lack of comparable data on women’s education in the fields of science, technology, engineering, and mathematics. There are also major data gaps for some countries, particularly in Africa.

A third concern is that the data are not fine-grained enough to capture what may be vast regional differences within some countries, particularly in terms of differences between urban and rural environments. In Germany, for example, Berlin may offer one of the best entrepreneurial ecosystems for start-ups, including efforts by high-potential female entrepreneurs, and may be preferred over other urban and also rural locations in Germany.

The author thanks two anonymous referees and the IZA World of Labor editors for many helpful suggestions on earlier drafts. The author thanks Ainsley Lloyd and Zoltan Acs for their comments and for use of their joint work for this paper. This paper has drawn extensively on previous work by the author [1].