Who benefits from the minimum wage—natives or migrants?

According to economic theory, a minimum wage reduces the number of low-wage jobs and increases the number of available workers, allowing greater hiring selectivity. More competition for a smaller number of low-wage jobs will disadvantage immigrants if employers perceive them as less skilled than native-born workers—and vice versa. Studies indicate that a higher minimum wage does not hurt immigrants, but there is no consensus on whether immigrants benefit at the expense of natives. Studies also reach disparate conclusions on whether higher minimum wages attract or repel immigrants.

Although most evidence suggests that a minimum wage reduces employment among low-skilled workers, there has been no evidence of an adverse effect on immigrants.

Data suggest that employment of low-skilled immigrants increases when the minimum wage rises.

Compliance with minimum wage laws does not appear to be lower for immigrants than for natives.

No studies outside of the US have examined the effect of the minimum wage on immigrants and natives.

Increased employment of low-skilled immigrants when the minimum wage rises may mean that employers substitute immigrants for native-born workers, to the detriment of natives.

Unauthorized immigrants appear more likely to be paid below the minimum wage than other workers.

Some evidence suggests that low-skilled immigrants are more likely to move to areas experiencing minimum wage increases, which could boost competition among immigrants and native-born workers at the same time that the number of jobs shrinks.

Neoclassical economic theory predicts, under certain assumptions, that a minimum wage  will reduce the number of workers hired while increasing unemployment. In its simplest form, the neoclassical model assumes that the market for labor is competitive and that there is a single type of labor. The demand for labor slopes down while the supply of labor slopes up. The more responsive, or elastic, labor demand and supply are to changes in wages, the flatter the curves. 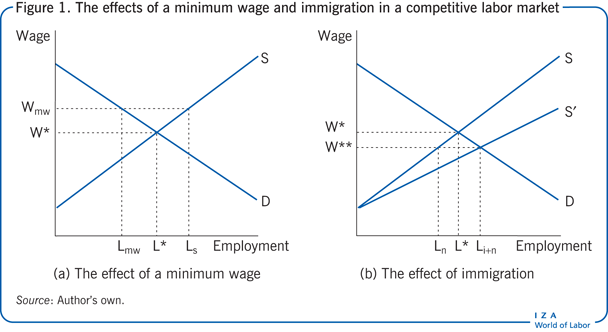 Under similar assumptions, neoclassical economic theory predicts that immigration will lead to a decrease in the wage and in employment of native workers. Figure 1 depicts the effect of an increase in labor supply due to immigration. Suppose that initially there are no immigrants—all labor is supplied by natives. Immigration boosts the labor supply from S to S’. As a result, the market-clearing wage falls from W* to W**. The more elastic labor demand is, the smaller the drop in the wage. The decrease in the wage reduces the number of natives who are willing to work from L* to Ln. The more elastic the native-born workers’ labor supply is, the bigger the drop in the number of natives willing to work. At the lower wage, employers are willing and able to hire Li+n workers. The number of immigrant workers is equal to Li+n – Ln.

The basic model further assumes that all workers are covered by the minimum wage. If there is a sector where the minimum wage does not apply (an “uncovered” sector), some workers who cannot get jobs in the covered sector will move to the uncovered sector. This movement causes the wage in the uncovered sector to fall. The adverse impact on employment is smaller, however, since workers can move to jobs in the uncovered sector. Immigrants may be more willing than natives to move to those jobs, particularly if they are jobs that tend to be perceived more negatively by natives because they are more demeaning, dirtier, or more dangerous than covered jobs [4]. In equilibrium, the expected wage (the probability of employment times the wage if employed) should be the same across the two sectors.

In sum, economic theory predicts that a minimum wage will reduce employment and boost unemployment. More-skilled workers will benefit at the expense of the least skilled. Immigrants may be more likely to work in sectors that are not covered by the minimum wage and to work for employers who do not comply with the law. Immigrants therefore may benefit less than natives from a minimum wage in terms of higher earnings.

Evidence on employment and earnings effects

Economists who study the effects of the minimum wage usually focus on low-wage, low-skilled groups of workers. In practice, this often means looking at teenagers or workers in low-wage sectors, like fast food. Studies have typically found that a 10% increase in the minimum wage reduces employment among teens by about 1–3%. Research has found negative effects on employment in Canada, Portugal, the UK, and the US, among other countries. However, some studies for the UK, the US, and elsewhere have concluded that a higher minimum wage does not necessarily reduce employment among teens or at fast-food restaurants. Potential explanations for such findings—which are inconsistent with the basic neoclassical model—focus on market imperfections, such as frictions in matching available workers with jobs. For example, a higher minimum wage may reduce turnover and job vacancies by reducing wage differences across employers.

Research for the UK suggests that the country’s national minimum wage reduces any adverse impact of immigration on the wages of low-wage natives, particularly women. One study notes, “Immigration over this period [1996–2005] tended to increase numbers of non-immigrant workers at the low end of the distribution below levels where the minimum wage is binding. This suggests that the minimum wage performs an important role to secure wages of workers who otherwise may lose out from immigration” [5].

The evidence that increases in the minimum wage lead to little, if any, substitution between immigrants and native-born workers is consistent with a number of recent studies that find little evidence that immigration in general leads to adverse wage or employment effects among native-born workers. Studies of Germany, the UK, and the US, among others, have concluded that immigration, even by low-skilled workers, has relatively little effect on native-born workers. Labor markets appear to adjust quickly to absorb immigrant inflows. In addition, most natives do not appear to compete directly with immigrants for jobs. Natives typically work in more communication-intensive jobs than immigrants do, and they often live in different areas.

Puerto Rico offers a prime example of migration in response to the minimum wage. The extension of the US minimum wage to Puerto Rico in the 1970s led to a substantial outflow of low-skilled workers [12]. (As US citizens, Puerto Ricans face no legal restrictions on migrating to the US.) An estimated 4.4% of employed men and 7.5% of unemployed men migrated to the US. Migrants tended to have fewer years of education and were more likely to be unemployed than people who remained in Puerto Rico. This outflow cushioned the effect of the minimum wage on unemployment in Puerto Rico.

Minimum wages among natives and migrants in Europe 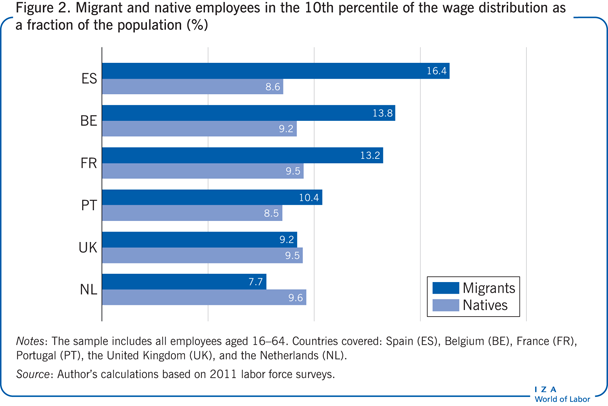 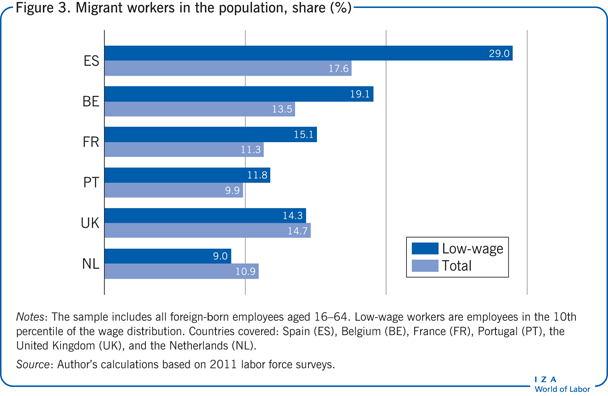 Knowledge about how the minimum wage affects immigrants relative to native-born workers is still sparse. This is a critical gap. Research has focused exclusively on the US, in part because of the large number of low-skilled immigrants there and the variation in state minimum wages. These studies reached disparate conclusions, though the reasons for the discrepancy are unclear. Economists and policymakers alike need a better understanding of how the minimum wage affects immigrants’ employment and earnings, not only in the US but in other countries as well. Understanding the effects is important for developing countries as well as industrialized countries since many developing countries impose wage floors, although compliance may be lower than in industrialized countries.

The author thanks an anonymous referee and the IZA World of Labor editors for many helpful suggestions on an earlier draft.

Who benefits from the minimum wage—natives or migrants?