Sustained economic growth led to reduced unemployment and real earnings growth, but prosperity has not been equally shared

Since 1991, the Australian economy has experienced sustained economic growth. Aided by the commodities boom and strong public finances, the Australian economy negotiated the global financial crisis without falling into recession. Over this period there were important structural changes, with increasing labor force participation among the elderly and the continuing convergence of employment and unemployment patterns for men and women. However, some recent negative trends include a rise in unemployment, especially long-term unemployment, a deteriorating youth labor market, and a stagnant gender earnings gap.

Australia has not experienced a recession since 1991, leading to strong growth in employment and lower unemployment rates.

Labor force participation of men and women aged 55–64 has increased.

Following rising income inequality from the late 1970s to 1990, inequality has remained relatively stable since 2000.

Despite sustained economic growth, long-term unemployment has increased over the past decade, returning to the relatively high levels of the early 2000s.

The long-term growth in real weekly earnings has been modest.

There has been remarkably little improvement in the gender earnings differential since 2000.

The Australian labor market has performed remarkably well over the 2000–2016 period. With the benefits of the commodities boom, unemployment declined, while participation rates and real average earnings grew. Despite the generally positive outlook, rising long-term unemployment, limited youth labor market prospects, excessive income growth among the top earners, and stagnant gender earnings differentials are all causes for concern. Policymakers could attempt to address these issues via taxation and transfer policies to moderate growth at the very top of the income distribution while promoting it toward the bottom of the income distribution.

Reliable and timely information on labor market developments is critical for understanding developing trends and highlighting emerging problems that require appropriate policy responses. Considering the performance of national labor markets in an international context can help identify the institutions, policies, and circumstances that account for the experiences of a specific country. This article documents key features of the performance of the Australian labor market over the period 2000–2016. 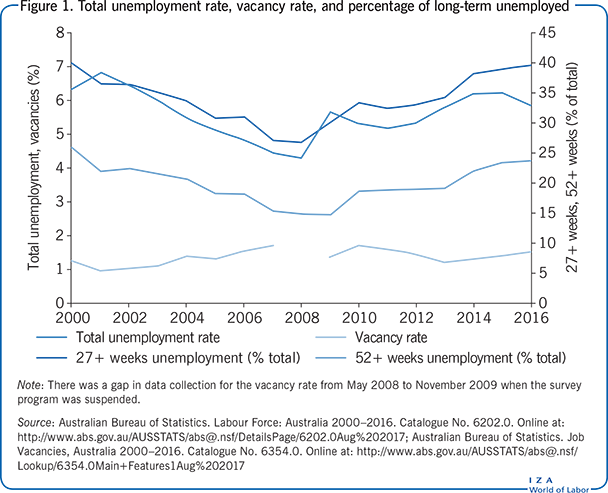 Since the early 1990s, the Australian Bureau of Statistics (ABS) has collected information on job vacancies through a quarterly survey of Australian businesses. There was a gap in collection from May 2008 to November 2009 when the survey program was suspended. Figure 1 charts the aggregate job vacancy rate, which is the number of recorded vacancies expressed as a percentage of vacancies plus employees, across all industries in November of each year the survey was conducted. The vacancy rate is a crude measure of unmet labor demand and as such is a useful counter-cyclical indicator. Over the 2000–2016 period, the vacancy rate largely mirrored the aggregate unemployment rate series. After a brief decline in 2001, the vacancy rate increased from 2002 until the break in the series in 2008; it then rose from 2009 to 2010, dropped from 2010 until 2013, before rising again in more recent years. 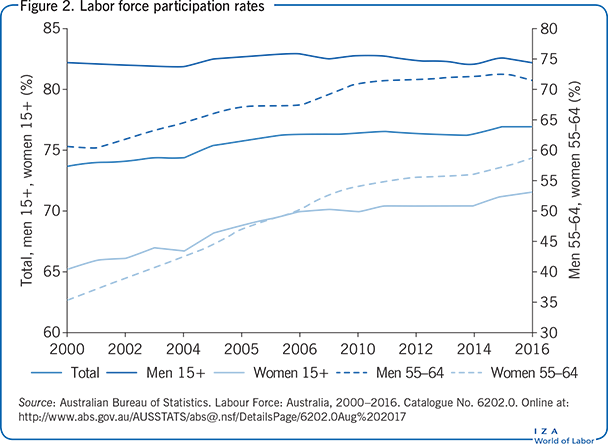 The demographics of unemployment—Age and sex

There are important differences in the incidence of unemployment across demographic groups in Australia. Like many countries, unemployment is especially high among teenagers. As shown in Figure 3, in the early 2000s unemployment among 15 to 19-year-olds was around 16.5%, compared to 6.5% for the total labor force. During the period of sustained growth up to 2008, unemployment declined across all groups, although the relative decline was less among the youngest. The slowdown in activity associated with the financial crisis led to an increase in unemployment among all demographic groups. However, this increase was most accentuated among teenagers, and since 2010 the teen-to-adult unemployment ratio has exceeded three. Combined with declining teen participation rates, there has been a clear deterioration in the labor market prospects of teenage workers over the past decade. 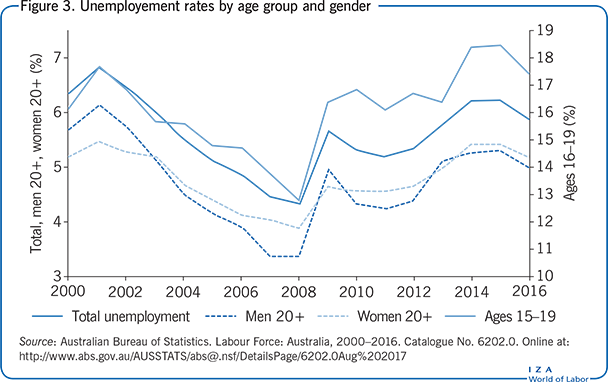 Aggregate statistics on average weekly earnings are derived from an ABS survey of employers, with the sample drawn from businesses registered with the Australian Tax Office. The series covers wage and salary earners and records their weekly compensation in the most recent pay period. The adjustment for inflation is made using the all items Consumer Price Index (CPI).

Two series for real average weekly earnings are shown in Figure 4. The series are real weekly earnings and real weekly full-time ordinary earnings. Changes in the former may be due to variations in average real compensation, average hours worked per week, or both. Changes in average hours worked per week (for example, due to the changing incidence of full- and part-time employment) distorts this as a measure of hourly compensation when making comparisons across groups at a point in time, or for a group over time. A superior measure that more closely approximates hourly compensation is the series on real weekly full-time ordinary earnings. This series is based on full-time employees (35+ hours per week) and excludes overtime payments during the reference pay period. Although this concept does not completely remove work hours variation from the series, it substantially adjusts for differences in weekly labor usage. 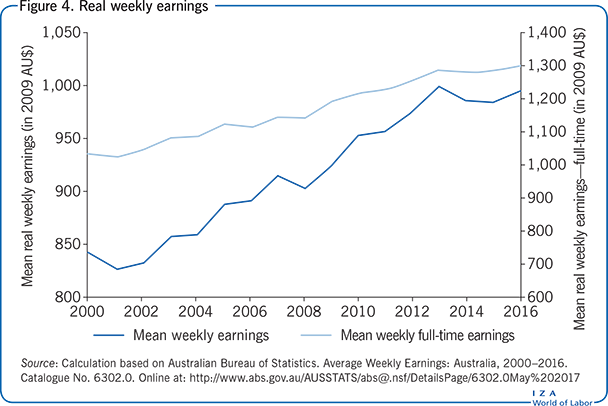 As evident from Figure 4, both series increased over the 2000–2016 period. The average annual growth rates were 1.04% and 1.44% for mean weekly and mean full-time ordinary earnings, respectively. The lower average rate for mean weekly earnings reflects the growing share of part-time work in total employment over this period. Although the average growth in mean full-time ordinary earnings is higher, given the sustained expansion of the aggregate economy over the past quarter of a century, the gains in mean earnings have been modest. Indeed, the Reserve Bank of Australia has recently cited the moderate growth in mean earnings as a concern [1].

It is important to consider trends in earnings for different groups in the labor force. Figure 5 presents the mean female weekly earnings as a percentage of male weekly earnings. Series for both mean total earnings and mean full-time ordinary earnings are shown. The relative mean total earnings series varies between 62.4% and 66.4%, and the relative mean full-time ordinary earnings series varies between 81.8% and 85.5%. The most remarkable feature of this graph is the relative stability, and lack of improvement, in the gender mean earnings differential since 2000. 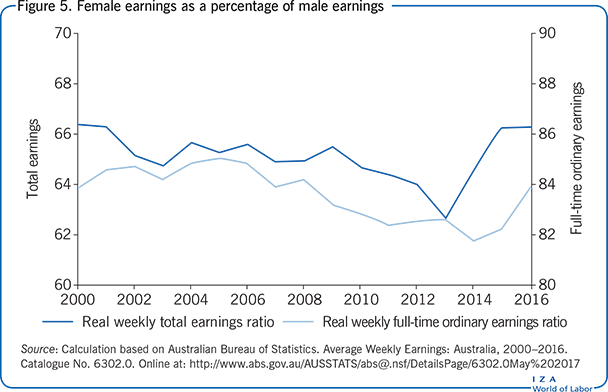 When examining social welfare, it is important to consider aspects of the distribution of earnings or income. The ABS does not publish statistics on weekly earnings beyond the mean. However, it does conduct household survey programs that measure a range of income concepts, for which distributional measures are published. This subsection focuses on the welfare concept of household disposable (post-tax, post-transfer) income, equivalized for household size and composition (based on the OECD adult equivalence scale).

Figure 6 presents simple and informative descriptive measures of inequality by showing the ratio of earnings at different income distribution percentiles. The calculated ratios include the 90/50, 80/50, 50/20, 50/10, and 90/10 ratios. The figure presents the time series for these distributional measures for equivalized household disposable income for the period 1999/2000–2015/2016 (split years are shown because the survey covers fiscal years, i.e. July–June). 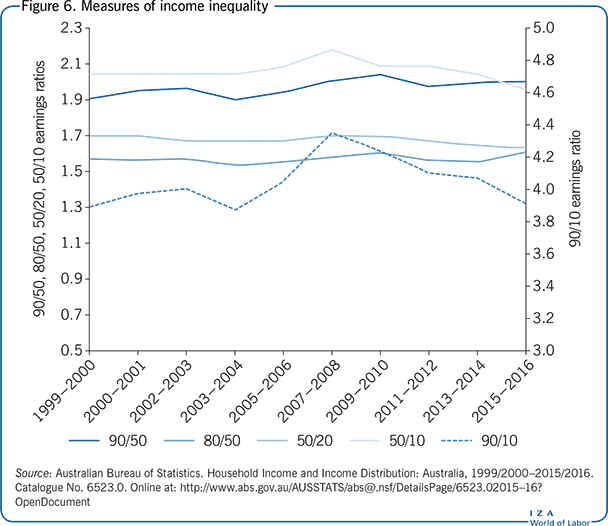 As in most industrial economies, there has been a significant increase in Australian earnings and income inequality since the late 1970s [2]. However, a distinguishing feature of Australia, as evidenced in Figure 6, is the relative stability of income inequality since 2000. In particular, the 90/50, 80/50, 50/20, and 50/10 ratios remain generally flat over the 2000–2016 period. These measures highlight that the household income distribution has remained largely stable. The exception is the 90/10 ratio, which rose throughout the period of strong economic growth up to 2008, and has declined since. This exception can be attributed to the rapid increase in household incomes at the very top percentiles, as has been the case in many other countries. Indeed, recent research based on Australian administrative tax data reveals that the most rapid rise in income shares has occurred within the top percentile [3].

Figure 7 presents the ratio of average weekly earnings of immigrants relative to Australian born workers from 2000 to 2014. The ratio is calculated for full-time (35+ hours per week) workers. On average, immigrants appear to be compensated well in the Australian labor market, with a mean weekly earnings ratio of 102% over the 14-year period. The annual figures tend to fluctuate around the mean, with no long-term trend. Considering gender groups separately, female immigrants working full-time do not fare as well as male immigrants, relative to their Australian-born peers. 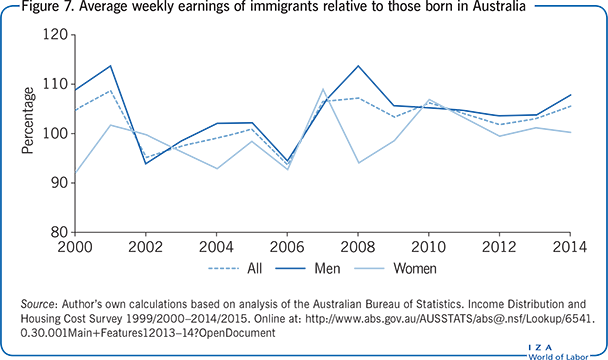 These earnings ratios reflect a positive outcome for immigrants in the Australian labor market. However, this should not be overinterpreted, as several caveats must be considered. First, when looking at all workers (part-time plus full-time), the immigrant earnings ratios fluctuate pro-cyclically, suggesting that immigrants’ work hours are more sensitive to the business cycle. Second, the raw earnings figures do not account for skill differences, which is particularly pertinent given Australia’s migrant policy of targeting skilled workers. Third, broad earnings aggregates mask significant differences by language (especially whether English is the first language), experience, occupational attainment, and years since migration. Further, the earnings comparisons do not account for differences in employment prospects by immigrant status and attributes. Indeed, there is an established literature that analyzes the economic integration of immigrants in Australia; it reports that immigrants face significant wage gaps, conditional on skills and other observable characteristics [5].

The most important limitation of Australian labor market data is in the provision of detailed and consistent information on the distribution of earnings and income. High-quality information is collected and disseminated by the ABS on labor force status by detailed demographic groups. However, there is a paucity of information on earnings beyond mean weekly earnings by gender. This makes it more challenging to track contemporary distributional developments, especially for detailed demographic groups, such as youths and the elderly, the native-born and immigrants, or by broad skill attainment levels. This gap in fundamental evidence introduces a time lag in policy development.

The Australian economy and labor market have performed remarkably well over the previous two decades, with sustained output and employment growth, reduced unemployment, and higher real earnings. At the same time, there has been a secular increase in the labor force participation of the elderly, especially elderly women. There is a continuing role for public policy to promote and support increasing participation at older ages, as this activity contributes to national production while reducing stress on income support programs.

Finally, there is a relative paucity of detailed and timely data on the earnings and wages of Australian workers. Enhancing the monthly Labour Force Survey with questions on earnings would help bridge this major gap in basic knowledge. Based on the information available, since 2000, earnings growth has been moderate and the gender earnings gap has not improved. It also appears that household income inequality has remained stagnant during this period, while recent evidence indicates substantial growth among the very top income shares. Taxation and transfer policies are thus important instruments for addressing income inequality, by curbing excessive growth at the very top of the income distribution and improving the progressivity of the system.

The author thanks an anonymous referee and the IZA World of Labor editors for many helpful suggestions on earlier drafts. The author further thanks Kadir Atalay for helpful comments and the ARC for financial support.