Recently, large companies like Google have made substantial investments in the well-being of their workers. While evidence shows that better performing companies have happier employees, there has been much less research on whether happy employees contribute to better company performance. Finding causal relations between employee well-being and company performance is important for firms to justify spending corporate resources to provide a happier work environment for their employees. While correlational and laboratory studies do find a positive relationship, the evidence remains sparse.

Several studies show that a positive mood induces subjects to spend more of their time in more creative tasks.

Most experimental studies have been based on small numbers of subjects who were not incentivized to complete the tasks assigned to them in a laboratory setting.

Experimental laboratory evidence is based on student subjects and so is not representative of the working population.

Most studies based on real-world data have not been designed to demonstrate causality.

A minority of studies report small or even negative effects of positive emotion on productivity.

Experimental laboratory studies and real-word evidence both validate gains to companies from paying attention to employees’ well-being. Happiness seems to motivate greater effort, increasing output without affecting its quality and thus boosting productivity. Both a temporary increase in happiness and long-term changes in baseline happiness are associated with greater productivity. Because most of the evidence is based on correlations or on laboratory studies, more research is needed for definitive guidance; still, the available evidence suggests that companies can be encouraged to introduce policies to increase employee happiness.

Over the past 30–40 years, academics and company managers have paid increasing attention to workers’ psychological well-being (sometimes referred to as the “affective revolution”). Recently, large companies have highlighted the importance of employee well-being in their company profiles. For example, Lara Harding, people program manager at Google, remarks that: “At Google, we know that health, family and well-being are an important aspect of Googlers’ lives. We have also noticed that employees who are happy...demonstrate increased motivation...[We]...work to ensure that Google is...an emotionally healthy place to work.” Similarly, Matthew Thomas, employee relations manager at Ernst & Young, notes that: “Supporting our people must begin at the most fundamental level—their physical and mental health and well-being. It is only from strong foundations that they can handle...complex issues.” But are such claims hype or scientifically rooted good sense?

Examinations of subjective well-being and behavior related to productivity

Psychologists have examined in broad terms the link between subjective well-being and productivity-related behavior using both experimental studies and real-world data. The experimental studies attempt to induce “happiness shocks” (defined as external events that change a person’s mood or affect in ways they identify as making them feel “happy”) in individuals in a laboratory setting, usually with a small sample of subjects and without incentivizing their behavior. Creating positive feelings induces subjects to increase their allocation of time to more creative tasks, which may be linked to greater productivity, while leaving less creative tasks basically unchanged [2]. This outcome suggests that happier individuals become more efficient at undertaking repetitive tasks—though the report on the study does not delve into why this might be true or how this effect interacts with performance-related payment. Psychologists have also argued that positive emotions influence people’s capacities for choice and innovation and improve memory recall and performance [3].

Studies in other social sciences

The links between human well-being and productivity have interested social scientists in many disciplines, with studies based on both laboratory experiments and real-word data. One study finds a large and significant correlation between long-term happiness and productivity [4]. It also finds mixed results for the correlation between workers’ emotions (“affect”) and supervisors’ ratings of workers, depending on what measure of worker affect is used. Other studies have uncovered evidence that happiness leads to greater creativity, which is potentially linked to productivity, and that job satisfaction is positively correlated with worker productivity [5], [6]. Yet another study draws on both longitudinal and experimental data to show that happy people—defined as people who frequently experience positive emotions like joy, satisfaction, contentment, enthusiasm, and interest—are more likely to succeed in their career [7]. In contrast with the rest of the literature, however, one study suggests that people with a negative affect tend to put forth greater effort [8].

Studies in economics and managerial sciences

Economic and managerial studies have only begun to examine the possible existence of causal links between productivity and happiness. Evidence of a link between happiness and productivity might illuminate the microeconomic foundations of the observed correlations between job satisfaction and stock-market performance (as in the Illustration). A correlational study using longitudinal data for Europe shows that an increase of one standard deviation in a measure of job satisfaction within a manufacturing plant leads to a 6.6% increase in value added per hours worked [9]. A study using longitudinal data on adolescents from Add Health, a comprehensive US social and behavioral database, reveals that even after controlling for several other factors, adolescent Americans who are “happier”—as measured through a series of questions—end up with higher incomes several years later in life [10].

The economics literature that is relevant to analyze the effect of subjective well-being on productivity does not examine the effects of happiness directly but mainly explores the theoretical differences between intrinsic motivation (based on internal psychological incentives) and extrinsic motivation (incentivized payments). A study of the interactions among self-deception, malleability of memory, ability, and effort considers the possibility that self-confidence enhances the motivation to act, which is consistent with the notion of a connection between affect and productivity [11]. The study uses an economic model of why people value their self-image to explain seemingly irrational practices such as handicapping self-performance or practicing self-deception through selective memory loss. In general, such studies reflect increasing interest among economists about how to reconcile external incentives with intrinsic forces such as self-motivation. For example, workers may boost their confidence in having the skills needed to achieve a specific target, which in turn increases their motivation to tackle the job.

The psychological experiments that have explored the relationships between affect and performance, creativity, and a variety of other outcomes that have links to productivity have taken place in non-incentivized settings (laboratory subjects’ pay, if any, did not rise when their performance improved), focused on laboratory-induced (short-term) shocks to affect, and involved only a small number of subjects, usually students. In contrast, the analyses by economists, organizational scientists, and sociologists who used real-word data have been limited by the difficulty of identifying the causal relationship running from happiness to productivity, due to reverse causality or the existence of omitted variables. The economics literature on motivation can provide a theoretical framework for analyzing the effect of subjective well-being on productivity along the lines shown in the preceding section.

To provide proof of a causal relationship running from happiness to productivity (rather than the other way around), researchers have expanded on the current literature in several ways. Following standard practice in experimental economics, a series of experiments involving almost 800 subjects incentivized the tasks participants were asked to perform by offering subjects monetary rewards [13]. The more tasks participants completed, the higher the rewards, which makes the experiments more relevant to what happens to productivity in the workplace. The study measured productivity directly in ways that enable differentiation among multiple factors that might influence the composition of productivity, such as effort, cognitive ability, and concentration. The study differentiated between the short- and long-term impacts of shocks, between positive and negative shocks, and between shocks induced within the laboratory and those experienced in the real world. The study also examined the psychological mechanism generating this effect. Using a theoretical model of time allocation between activities, the study showed that individuals experiencing a positive happiness shock put more effort into their jobs and less attention into their background worries. 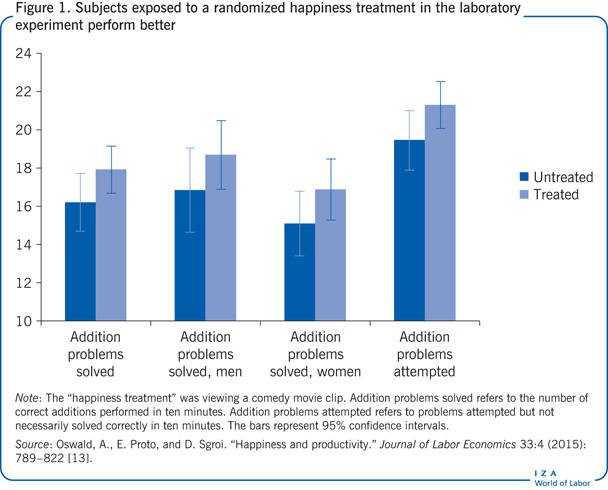 The second experiment explored the effect of major unhappiness shocks—bereavement and family illness—in the real world [13]. Subjects performed the same task as in the first experiment, but after they completed the task they were asked whether they had experienced a bereavement or family illness in the last two years. Subjects who had experienced a bad life event reported lower happiness and had about 10% lower productivity than subjects who had not experienced a bad life event (Figure 2). 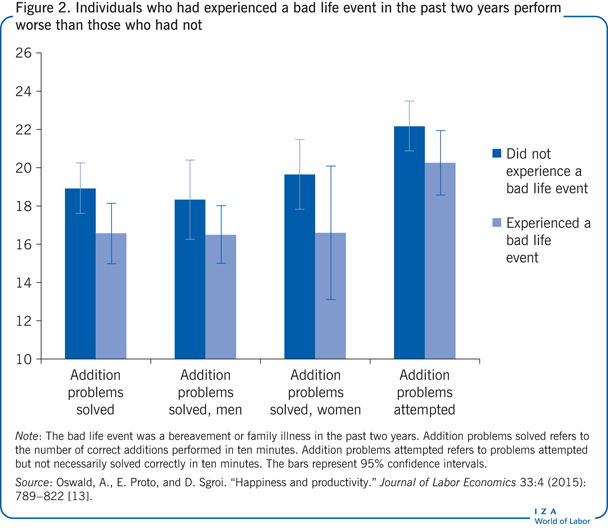 In general, the evidence on the link between happiness and productivity using real-life data is based on correlations and does not provide convincing proof or demonstrate causality. The experiments in the psychological literature are better at assessing causality, but they are based on small samples and the activities are not properly incentivized.

The study involving hundreds of subjects and a series of experiments relying on incentivized tasks represents a step forward since it provides experimental evidence of causality running clearly from happiness to productivity and is based on a large sample of students [13]. However, the study is based on experiments that ask subjects to engage in highly stylized tasks, such as adding up as many groups of five two-digit numbers as possible within ten minutes. In addition, as is typical in laboratory experiments, the sample was taken from a student population instead of from the working population, which casts some doubt on the portability of the results to the real-word working environment. A natural follow-up would be to perform a field experiment or a laboratory field experiment with real employees and in a natural working environment.

Furthermore, the studies explored here do not generally take into account the costs of investing in workers’ well-being, such us creating a pleasant work environment for employees. Doing so would be a necessary step forward to validate the cost-effectiveness of policies to increase employee well-being.

The empirical literature on the economics of well-being has tended to view emotional factors, if it considers them at all, as an output, whereas the evidence presented here suggests that they should be considered inputs in the production process. Finally, closer connections are needed between applied psychology and applied economics in order to better understand the link running from emotions to economic outcomes.

The broad message from the literature on the link between happiness and productivity is that both positive and negative emotions have a potentially powerful economic effect. Experiments involving close to 800 subjects found that a rise in happiness leads to a marked increase in productivity in a paid piece-rate task [13]. This effect appeared in each session of the experiment and in both male and female subjects. The study found that the effect operates through a change in work output rather than in work quality.

These findings have several implications for company practice and for research. First, if happiness in a workplace carries with it a return in terms of enhanced productivity, there are enormous implications for firms’ promotion policies and for the way they structure their internal labor markets. For example, managers could be rewarded on the basis of employees’ job satisfaction, and workers could be allowed to take a more active part in decision-making, which in general raises job satisfaction.

Second, the effect running from happiness to productivity raises the possibility of self-reinforcing spirals—ones that might even operate at a macroeconomic level. Happiness might lead to greater productivity in an economy, and that might in turn result in greater well-being in the population. These happiness–productivity–happiness spirals would be a fundamental propagation mechanism linking short-term shocks to the longer term and represent an important avenue for future research.

Finally, the evidence surveyed here indicates that economists need to pay more attention to the effect of emotions when they analyze and design policies.

The author thanks an anonymous referee and the IZA World of Labor editors for many helpful suggestions on earlier drafts. Previous work of the author contains a larger number of background references for the material presented here and has been used intensively in all major parts of this article.